The peninsula of Cornwall is one of the UK’s favourite holiday destinations with over 15 million visitors every year. Known as Kernow, from the ancient Celtic kingdom days, this region in South West England is renowned for its picturesque fishing villages, wild and dramatic coastline and stunning, golden beaches.

I doubt there’s a campervan owner alive who hasn’t been tempted to throw a couple of sleeping bags in the back of the van and head off in the direction of Land’s End.

The South West Coastal Path follows the 1100 mile coastline and is peppered by over 300 wonderful beaches, some of which provide the best surfing conditions to be found anywhere in Europe. The diversity of attraction from historic gardens, old tin mining ruins, water sport facilities, theme parks, to household names such as The Eden Centre and The Tate Gallery at St Ives make this a fascinating county to visit at any time of year.
Getting to Cornwall is pretty straight forward. From Exeter in Devon, you either take the A38 which takes you under Dartmoor or the A30, which takes you over.

North Cornwall:
We’re going to start our campervan hire tour of Cornwall by taking the high road and following the dual carriageway all the way down to Launceston. Here you’ll find an impressive castle dating back to the Norman Conquest and a great location to guard the entrance to Cornwall. Now looked after by English Heritage, the castle dominates the local countryside and provides spectacular views across the valley. A great place to stretch those legs, take a wander around the castle grounds and even whip out the kettle for a quick brew.

Back in the van and head for Boscastle, down the A395. A busy fishing village back in the 17th century, today, it’s remembered for the big flood of 2004 which devastated the village but miraculously, did so without any loss of life. There’s plenty of parking for your van alongside the Valency River, which is well worth a stroll down the riverside towards St Juliot’s Church of Thomas Hardy fame. Back in the village there’s a good selection of watering holes and the witchcraft museum that’s definitely worth a visit.

Continue down the coast road for a few miles and you arrive in Tintagel. Believed to be the birthplace of King Arthur of round table fame. The town gets a little crowded in the height of summer with the castle being a big pull for the marauding masses. That said, a stunning cliff top backdrop and fascinating tour warrant the entrance fee. Also, great for those of you looking for a cream tea!

Back aboard and continuing down the coast road until you come to Trebarwidth Strand; in my mind, one of the most spectacular beaches in Cornwall. Be sure you check the tide times first as it’s really only accessible at low tide. This dog friendly beach is the perfect place to stroll up to the Port Willian and enjoy a pint of Tribute whilst watching the sunset over the surfers below.

After 3 relatively quick stops, we now move on to Port Isaac of Doc Martin TV fame. A quaint little fishing village with narrow streets and trendy bars and cafes. Great if you like sea food, clifftop walks and parking out of town. Port Isaac and campervans aren’t really compatible. Luckily, there’s a new car park at the top of the village.

Next, we continue along this spectacular North Cornish coast to Polzeath, fast becoming a London playground by the sea. Plenty of Range Rovers and Porches to be found all year round. Very popular beach, cafes, interior design shops and surf schools to keep you occupied. Van parking on the beach or on the overlooking fields.

Next, we head off around the Camel Estuary, possibly stopping off for a bite to eat at Nathan Outlaw’s restaurant in Rock, wallet permitting that is. Fantastic food but as you might have guessed, pretty damn expensive.

On the opposite side of the estuary to Rock lies Padstow or, Stienville as some locals call it, due to the number of eateries owned by Rick Stein in the town. A little over commercialised but still a working port and a great place for some fish and chips whilst you watch the world go by. Could also be time to unleash those bikes and joint the beautifully scenic Camel Cycle Trail.

We finish our tour of North Cornwall with a visit to Newquay, a popular holiday destination, boasting some of the finest sandy beaches around. There’s a vast range of things to do including some of the world’s best water sports competitions. Both the Boardmasters festival and the surfing championships are held on Newquay’s Fistral beach and Watergate Bay respectively.  It is/was home to the slightly infamous Run to the Sun car and van festival but sadly, the 2017 festival has been cancelled. 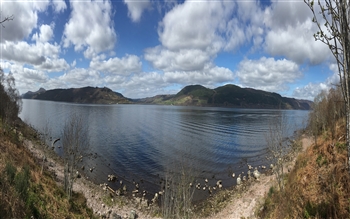 Campervan in The Cairngorms